Categories: To Do in Galati 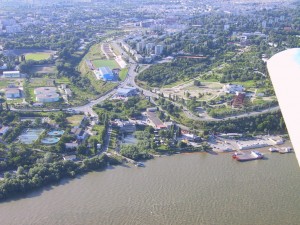 The name “Galati” is derived from the Cuman word galat. This word is borrowed from the Arabic word qal’at, meaning “fortress”. Other etymologies have been suggested, such as the Serbian galac. However, the galat root appears in nearby toponyms, some of which show clearly a Cuman origin, for example Gălățui Lake, which has the typical Cuman -ui suffix for “water”. Another toponym in the region is Galicia, with its town of Halych, locally associated with the jackdaw (Kawka, Halka). Other similar place names are Galich, Russia and Galatia in Turkey. Gaul might be a derivation from Galatia, thus suggesting a Celtic origin. A similar pattern occurs with the Celtic-sounding word, Ligures, referring to “Caladaa” (a city of the Ligurian or Genoan territories). Although possible, a Celtic origin is, nevertheless, unlikely. Galati translates to:
Greek: Γκαλάτσι (Galatsi); German: Galatz; Hungarian: Galac; Polish: Gałacz; Turkish: Kalas; Bulgarian: Галац (Galats); Ukrainian: Галац (Galats) and Russian: Галац (Galats).

Archeological evidence points to occupation of the region in the neolithic period. For example, north west of the town of Galați, on the eastern shores of the Malina marshes, fragments of ceramic-type Stoicani Aldeni, stilex and tools made of bone have been found. A stone sceptre, from the late Bronze Age, belonging to the Coslogeni culture was found on the marshes’ southern bank. Galați town itself developed from an ancient Dacian settlement of the sixth and fifth centuries BCE where there was a ford across the Danube river. In 101 to 102 and 105 to 106, the Dacians fought wars against the Romans and the area became part of the Roman empire. From the 300s a Daco-Roman settlement developed at a ford south of the site of the Church of the Virgin.

There is evidence of continuous inhabitation of Galați since the 600s. A treasure hoard consisting of 12 silver coins issued between 613 and 685 was found in a Byzantine tomb near the Church of the Virgin. Western and Byzantine coins from the time of Emperor Michael IV (1034–1041) were also found. At one time, the city became part of the Republic of Genoa Territories and was called “Caladda”.[4] In 1445, a document signed by Stephen II of Moldavia mentions Galați. In 1484, Chilia was conquered by Ottomans. Galați township remained Moldova’s only port, not only for domestic trade but also for trade with Turkey and Poland. In 1590, the Galati Jewish cemetery was opened.

The Ukranian folk hero, Ivan Stepanovich Mazeppa was born in 1644 in Podolia Palatinate. He became a Hetman in 1687. He died on October 2, 1709 in Varna, (then in Bessarabia, Turkey) and was buried in Galați. This came about because Mazeppa’s family had obtained a firman (a decree) for Mazeppa’s body to be taken to Jerusalem. However, when his body reached Galați, Mazeppa was buried at the St George church. (A local merchant had built the St George church reusing Roman masonry and it was dedicated to the Church of the holy sepulchre in Jerusalem.) The St George church is inscribed,

dating it to 1 April 1664. Hetman Mazeppa was buried in a brick tomb. The traces of Its inscription containing an eagle with one head indicate Mazeppa and the Unkraine. The church was later plundered in Tartar raids but two Galați suburbs, “Mazeppa 1 and 2” are named for this man.